Posted on February 7, 2020 by Cinema Lounge Team Leave a comment

Ezra Miller, who starred as The Flash in Justice League, made a surprise cameo in the recent ‘Crisis On Infinite Earths’ crossover event in DC’s Arrowverse. We all enjoyed the cameo however if we look closely it seems to be more important than we all think.

The Crisis On Infinite Earths crossover event starring the cast of Arrow, Supergirl, Legends of Tomorrow, Batwoman and not forgetting The Flash. Arguably, this turned out to be one of the biggest superhero events of the hero with the entirety of the Arrowverse coming together to stop the Anti-Monitor destroying the multiverse. However, what sparked everyone’s attention is the surprise cameo towards the end of the event of Ezra Miller’s Flash from the Justice League making his crossover onto the Arrowverse. Now, this could mean that more major crossover events could be happening for DC’s Arrowverse and their cinematic universe in the long run. But what else could this mean for future events and for Ezra Miller’s Flash?

On one hand, this could be a major stepping stone for the future of the Arrowverse as this could mean that the DC universe as we know it from Justice League could be apart of the Arrowverse’s multiverse meaning as Grant Gustin’s Flash and Ezra Miller’s Flash crossed paths together in the speed force. So could this be the tease for a whole new start of crossovers where we could potentially see Henry Cavill’s Superman, Ben Affleck’s Batman, Gal Gadot’s Wonder Woman and Jason Momoa’s Aquaman? We are more than likely to see Cyborg, the final Justice League member, as his civilian name Victor was mentioned very briefly during Ezra’s time with Grant in the speed force.

Things are still unclear about how this event can still even be possible with the current state of the multiverse. They are some theories that people have been suggesting about this such as was the Ezra Flash we saw a past version as he could have possibly time travelled from his reality which we may see more of in the new upcoming Flash movie. This may not be true on the other hand as we know that Ezra has not yet discovered time travel or even realised that the multiverse theory is true according to his reaction on the crossover event.

Speaking of the Flash movie coming in 2022, I feel as if this crossover is a perfect setup for the movie to come with possibly a few key points already teased. For instance, it seems as though Ezra will now be calling his character The Flash as well after the expression when Earth-1 Flash referred to him as The Flash and he seemed to like the name. Another point to make is that the Justice League Flash may have a somewhat of a change of suit next time we see him, which won’t be until the Flash movie in 2022 unfortunately, as when the two met each other for the first time it seemed as though both Flashes were interested in each other to suit designs and capabilities. Both these have used the opportunity perfectly as they may include foreshadowings for what’s to come in the future. 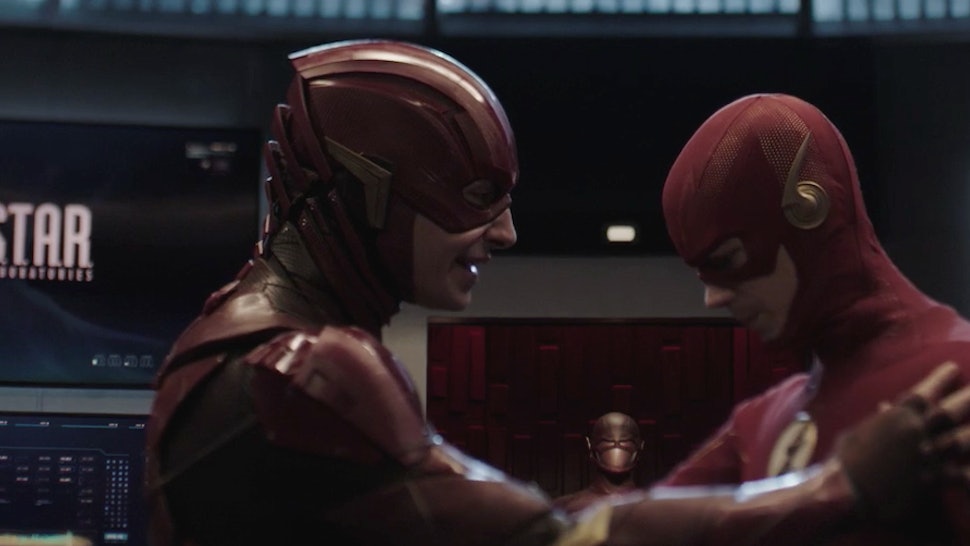 What we know so far about the Flash movie is that it is based on the Flashpoint timeline meaning that the speed force will be an important aspect which links back to the cameo in Crisis on Infinite Earths. So this could potentially mean that when we saw Ezra’s Flash with Grant’s, he may already be in the middle of Flashpoint and have stumbled across Flash in the speed force accidentally. If this is true, it is a brilliant tease for fans. One more thing to point about is that Victor (Cyborg) in Justice League could play a huge part in Flashpoint meaning as his name was mentioned just as Ezra left the speed force with the ending line “I told Victor this was possible”.